The 1950 Olds® 88 changed the muscle car world and helped shape it for decades to come. The 88 was fitted with the motor from the larger Olds® 98—a 7.25:1 high-compression overhead-valve Rocket V8 producing 135hp. It was quite an impressive engine for such a light car of the time. The 1950 Olds® 88 was truly the first mass- produced muscle car to come out of Detroit.

Auto World has replicated this classic Olds® as it appeared in the March 2017 issue of Hemmings Motor News. Before its restoration, the owner/ restorer Keith Berg drove the car to a stock class victory at the 1962 NHRA Winternationals and claimed numerous NHRA/AHRA records. This car was also featured in the 2008 issue of Hemmings Muscle Machines. 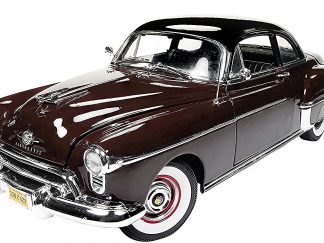