It all started as a Boss 302 road car. Purchased from Jerry Claytons car yard in New North Road during 1972 by the management of Sidchrome Tools. Originally costing management $4500, it was yellow with black stripes and black upholstery. The management at Sidchrome found, employed and sponsored Jim Richards to drive the car after developing it from a road car.

It was taken to Papakura on a country property where Jim and Murray Bunn transformed it into the “Sidchrome Mustang”. They set out on constructing the first split rims to be seen in NZ. Much of the cars performance was set around its wheels.

The car was then painted Red and Yellow, with Sidchrome signage. The vehicles debut was at Baypark in Easter 1973. The same year Richards won the 73/73 NZ Salon car title. The cars yellow paint was covered red in its updated look.

In 1975 the car was sold by the management of Sidchrome Tools to dealer Colin Giltrap and Jerry Clayton as joint owners. 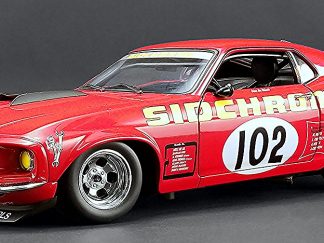