The 1998 Australian Touring Car Championship was contested over a Ten Round Series with Three races per Round, beginning in February at Sandown International Motor Raceway and concluding in August at Oran Park International Raceway. The title, which was the 39th Australian Touring Car Championship, was won by Supercars legend and Hall of Famer, Craig Lowndes.

In what was a season of total domination by Lowndes, beginning with back-to-back victories in the first two Rounds at Sandown and Symmons Plains respectively and following suit with a Round 4 victory at Philip Island. It then took almost a full month before Lowndes stood atop the podium again and he did so emphatically. Lowndes would bounce back with a flawless weekend at Barbagallo Raceway in Perth, Western Australia, winning all 3 races over the course of the Round. Whilst dominating the series to this point, Lowndes had not had a clean-sweep of a Round (victorious in all 3 races) up until Barbagallo.

Lowndes’ winning form continued for the remainder of the season going on to claim Round victories at both Calder Park Raceway in Melbourne, Victoria, and another clean-sweep of the final Round in the series at Oran Park International Raceway to cement his overall victory and Championship Winner status of the 1998 Shell Australian Touring Car Championship. 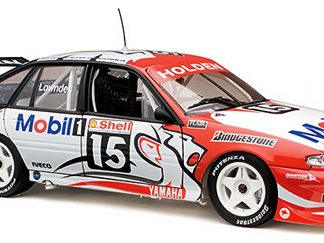