Featuring a striking livery designed by Ford designer Nick Hogios, Gibson motorsport chassis number 014 debuted at Bathurst in 2001 in the hands of Craig Lowndes and Neil Crompton and was quickly dubbed ‘The Green Eyed Monster’ because of its striking fluro green headlight covers and corresponding black and silver livery.

It was driven again by Lowndes in 2002 season, though this time under the 00 Motorsport banner after Fred Gibson parted ways with the team that carried his name.

Again Crompton joined Lowndes for Bathurst, with Lowndes qualifying the car in a strong 8th position for the big race. Both Lowndes and Crompton felt like they had a very car for the race, however a plastic bag blocked the car’s radiator and it was forced to retire when it cooked itself on lap 127 in the later stages of the race. 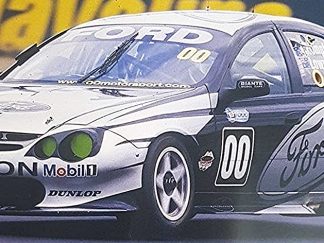