The 1997 EL GT Falcon was a unique performance car which was built to celebrate the 30th Anniversary of the first Falcon GT, the XR built in 1967. Any motoring enthusiast or fan of the blue oval would be very familiar with the GT nameplate, with a range of GT’s in various forms being released from 1967 through to 1976. It was a golden era for Ford Australia with the “Win on Sunday, Sell on Monday” train of thought being prevalent during the late 60’s and early 70’s. This approach brought the company much success given their strong touring car performances and Bathurst wins during the period and as a lasting result, the legend of the GT was born.

The EL GT was the second “modern” GT released in the 1990’s by Ford after the EB GT was earlier released in 1992 to celebrate the 25th Anniversary of the GT nameplate. Like the EB before it, the EL was (and still is) a highly desirable collector’s car for Ford diehards with reports of 250 cars being built and sold in Australia in both manual and automatic transmissions. Unlike the wild colour schemes of the original GT’s, the EL GT was released in a very subtle range of colours which included Heritage Green, Sparkling Burgundy and Navy Blue (which this model is based). With a Windsor V8 engine under the bonnet combined with special cylinder heads, a high compression (9.0:1), large valves, heavy-duty valve springs, roller cam followers, fuel injection, a large throttle body, and extractors, the EL GT was a 200kW beast. To account for the power, a heavy duty clutch, strengthened gears and a short throw gearshift were also included as standard fare. The impressive running gear was matched by the now iconic body kit to ensure that this celebration car had the looks that were on par with its performance.

Produced in a high quality closed body resin, this scale model of the Ford EL Falcon GT looks exceptional on display. The exterior body lines and kit have been replicated in very fine detail which is a hallmark feature of sealed resin models. Areas such as the front grille and air vents in the bonnet scoop are also finely detailed and the Sparkling Burgundy paint job finishes the model extremely nicely. Despite the model being a sealed body, the windows are clear and no short cuts have been taken with replicating the interior which features remarkable detail and is certainly another impressive feature of this model. 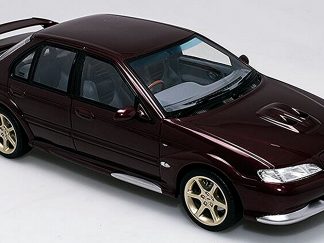