This model will be produced in die-cast with fully opening parts other than the boot featuring high detail throughout in an exclusive limited edition with a numbered Certificate of Authenticity.

After joining DJR Team Penske in 2016, the 2017 Supercars Championship was always going to be a massive year for Kiwi Supercar ace Fabian Coulthard. With Shell taking over naming rights sponsorship of the team and the recruitment of young gun Scott McLaughlin to partner him in car 17, all eyes were on the team and both drivers to start delivering Ford fans some much craved success in the new season.

With promising performances at the Clipsal 500 and a dominant weekend from the team at the non-championship Australian Grand Prix event, all eyes turned to Tasmania. The attention was warranted because the team delivered on their early season form and it was in the Apple Isle where Coulthard delivered the team their first championship race win under the DJR Team Penske / Shell V-Power Racing banner. It was also Coulthard’s first championship win personally for the team with team mate McLaughlin finishing in second place to secure the team’s first championship race 1-2 finish. As memorable as that was, the icing on the cake was Australian Motorsport icon Dick Johnson accepting the teams trophy on the podium with both his drivers, a moment that Ford fans have been waiting a long time to see. 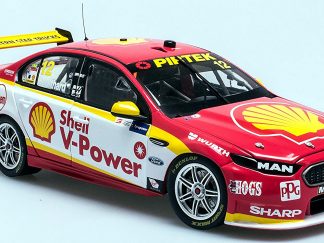