In 1984 Dick Johnson envisioned the Ford Mustang GT as a car that could be competitive under the new Group A racing rules scheduled for 1985. He tracked down two in Germany and took them back to his Queensland workshops for an engine rebuild and thorough race fitout.
Although Johnson described the car as one of the best handling and braking cars he has ever driven, the lack of engine power meant that during the 1985 ATCC season the car was not as competitive as he’d hoped.
After qualifying 3rd for the 1985 Bathurst 1000, Dick Johnson and Larry Perkins finished seventh in their Palmer Tube Mills Ford Mustang GT, four laps down from the winning John Goss Jaguar XJ-S.
“The Mustang was a great little car. It’s just unfortunate the power-to-weight ratio was not the most desirable, but the handling, braking and stability was superb. It was a damn good car…” – Dick Johnson.

Liam M.
I have received the products (Mad Max models) today. I liked the products very much. Thank you for the careful packing and quick transaction.
Yukiya
Japan
I just wanted to let you know that I received Order #1687 for my 3- 1:43 car order and couldn’t be more pleased with both the cars and their boxes. Thank you very much. Have a g’day down under. 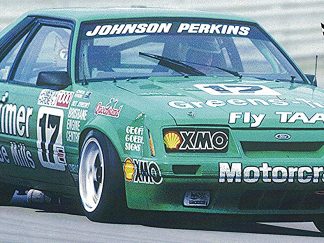