Ford Sierra RS500 that Allan Moffat and Gregg Hansford drove to victory in the 1988 Enzed Sandown 500 Allan Moffat never did things by halves.

When it became clear to him that the Ford Sierra Cosworth RS500 was the gun Group A touring car to have, Moffat went straight to Andy Rouse – one of the turbo car’s top gurus – for his assault on the 1987 Bathurst 1000. But when his Rouse-prepared car was blown away on both speed and reliability by Ruedi Eggenberger’s black Texaco machines, Moffat wasted no time in securing one of the Swiss tuner’s cars for himself.

It arrived in time for a partial campaign on the 1988 Australian Touring Car Championship and its sprint races, where a series of steady performances belied Moffat’s focus on reliability over speed to ensure the car was in prime condition for the endurance races. The first test came at the Enzed 500. Moffat had captured the Sandown endurance race five times previously, albeit never on the extended 3.9 kilometre layout used since 1984. His Bathurst blitzkrieg – when he (in secret) imported Eggenberger himself, his works Ford team mechanics, and star driver Klaus Niedzwiedz – was three weeks away, and it was just Moffat, co-driver Gregg Hansford, and his regular crew against the growing might of the local Sierra runners.

Dick Johnson, fresh from his showdown with Eggenberger and Rouse at the Silverstone Tourist Trophy in England, claimed a comfortable pole position while the #9 Sierra lined up seventh on the grid. Moffat was the big mover in the early laps in climbing to third but his focus on reliable speed paid dividends on lap 24, inheriting the lead after both of Johnson’s Sierras succumbed to mechanical maladies. The only hiccup for the ANZ car came early in Hansford’s first stint, the white Sierra making an unscheduled stop to sort out a leaking fuel dry-break fuel valve. He soon reclaimed the lead as more of their rivals wilted; George Fury and Mark Skaife briefly led until their Nissan Skyline’s tailshaft broke, while a slow brake pad change on Larry Perkins and Denny Hulme’s Holden Commodore allowed Moffat and Hansford to reclaim a lead they held to the flag.

Moffat’s victory, his sixth triumph in the Sandown enduro, proved to be his last race win on his adopted-home soil. 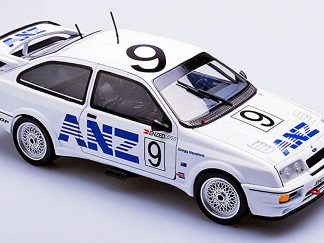