In 1970 Ford produced a new XW range of vehicles. They had a GT and with their desire to win at Bathurst again released a GT-HO model – the Phase II, of which approximately 400 were produced.

The Phase II XW GTHO had a top of the line interior with a centre console, sports steering wheel and dash, radio, floor mats, door sill plates and door trims with woodgrain and chrome accents.

From the outside, the Phase II looked very similar to the previous XW, except this Phase II had 14×6″ wide 5 slot rims with chrome hubcaps. Mechanically, the XW Phase II was a totally different car from its predecessor. The trusty Windsor engine was replaced by the new 351 cubic inch Cleveland. The new Cleveland had the potential to produce great horsepower, the GT-HO engine was rated at 300bhp, but the true figure would have been closer to 345bhp.

All the new features on the Phase II made it at truly awesome machine! 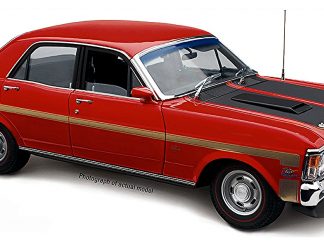