The Armstrong 500 moved to its now home of Bathurst in 1963. Cars were split into classes based on their purchase price, and limited to Australian built or assembled cars. 1963 was the first time car manufactures produced modified versions of their road cars, in an effort to win.

Grid positions for the race were draw out of a hat, as such practice times were not important. But the official fastest time went to the Holden S4 of Muir/Martin.

Once the cars had settled from their allocated race start position the factory Ford Cortinas stormed ahead, with the Holden S4s giving chase. By the end of the race the winning Cortina of Firth and Jane werea full lap ahead of the second place Holden S4  pairing of Morga/Sach.

This diecast model will be a scheduled production of 1000 pieces world wide. 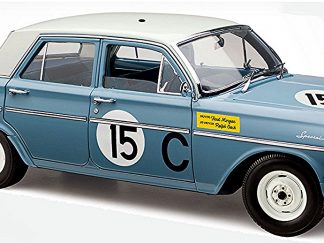