The Holden HR range was released in April 1966, replacing the Holden HD series which had been in production since 1965. In addition to a revised grill, the HR featured a reworked roofline and a larger rear window, revised rear lights and changes to almost all exterior body panels. New changes also included a widened track, improved interior trim and woodgrain interior finish for the Premier models. The HR was offered as a 4-door sedan and 5-door wagon in three trim levels: Standard, Special and Premier. The commercial range included a utility and panel van.

Classic Carlectables Holden HR Premier sedan features the 126bhp 186ci (3.0L) six cylinder engine standard on the Premier, 3 speed column shift manual transmission, an interior featuring the plush seats, centre console detailed with woodgrain finish and the arm rest. The fine workmanship includes the steering wheel with the unique horn ring and our model features plenty of chrome detailing and highlights. 252,352 vehicles were produced up to January 1968 when the HR Holden was replaced by the HK. 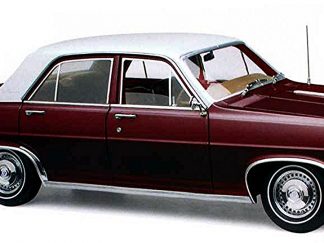