Released in April 1966, the Holden HR became one of the most successful Holdens ever produced. Ending its production in January 1968, a total of 252,352 HR were produced.

The Premier was the top of the line and it included wood grain vinyl detailing on the door trims, console, dash and horn button. Premier trim included stainless steel around the wheel arches, along the boot, between the tail lights and stone guards. Nasco accessories like sill chrome mouldings, wheel trim rings, side mirror, radio, aerial, hood ornament are included in our model. 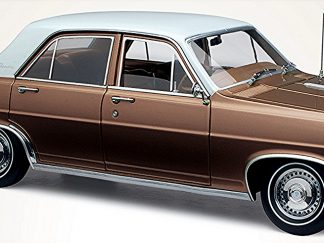