Let The Good Times Roll. That was the catchy tagline for Holden’s promotion of the HX Sandman when it was introduced in 1976. It was a fitting way to describe the popular Panel Van as it had firmly cemented itself as the car of choice for a young generation of Australian’s who had care free attitudes and spent their weekends around the beach. The HX had a relatively short lifespan compared to the previously released HJ version. That combined with the HX range of bold colour combinations, side stripes and the brilliant tail gate sticker has made the HX perhaps the most iconic incarnation of this popular and uniquely Australian car.

The 1:18 Scale Royal Plum HX Sandman has been produced in die-cast with fully opening parts, high detail and beautiful finishing throughout. This will be Biante’s 4th HX Sandman Panel Van release after previously releasing the Mandarin Red, Mint Julep, and Cotillion White versions. This will also be our first purple Sandman in our range so if you’re trying to get all the colours of the 70’s Sandman rainbow, then this one is a must have!
Produced in fully opening diecast, this model will be set to an exclusive limited edition and comes with a numbered Certificate of Authenticity. 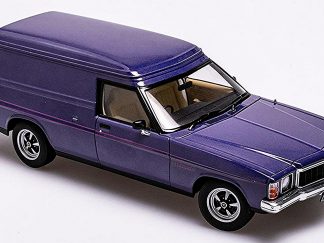