After the success of the VE road car, racing fans got their first look of the V8 Supercar version of the car in late 2006 when Holden unveiled the racing version for the first time. The VE was the first new floor pan for a Commodore since the VT, which had debuted in V8 Supercars in 1998 and formed the basis of the floor pan for the VX, VY and VZ models that followed.
Built by Walkinshaw Racing and Holden Motorsport, the first VE Commodore prototype V8 Supercar featured more aggressive, ‘fatter’ styling than the VZ it replaced while retaining all of the same running gear (engine, gearbox, tailshafts, diff housing, double wishbone front suspension etc) as the superseded model.
The prototype car project began in April 2006 when a body shell was delivered to Holden’s homologation team, the Holden Racing Team, in Melbourne. It was eventually built up into the very first VE Commodore V8 Supercar and underwent testing at Holden’s Lang Lang proving grounds in the hands of HRT pilots Todd Kelly and Mark Skaife before being taken to Woomera in South Australia for on-going aerodynamic testing.
Long-time Holden endurance driver Nathan Pretty also drove the car in a TEGA (Touringcar Entrants Group of Australia) aerodynamic test and it was unveiled to the public during a launch on October 24, 2006 at Holden HQ in Port Melbourne.
It appeared in a one-off day-glow red, black and white livery with the familiar Holden ‘racing lion’ logo down the side, Holden corporate signage and the number ’07’ on the door as a prelude to the car’s racing debut in the 2007 Clipsal 500 in Adelaide.
If there’s a better looking race car around, I haven’t seen it! commented Skaife at the time. The flared guards of the VE road car suit the race variant perfectly and give the car a real hard nosed Euro stance – it’s going to look fantastic at race circuits around the country.
Unlike other occasions where prototype cars remained as static displays or ride cars when their work in the homologation process had been done, the original VE Commodore ended up becoming a race car and was pressed into service the following season.
It competed in the first few events of the 2007 V8 Supercars Championship in the hands of Mark Skaife and the Holden Racing Team carrying the racing number 2 before being sold to privateer driver Tony D’Alberto, who drove it in the V8 Supercars Championship in 2008, 2009, 2010 and the beginning of 2011 before moving into a Falcon.
From 2007 and 2012, the VE Commodore (and its VE II brother) would become the most winning car in Australian Touring Car Championship/V8 Supercars Championship history with 103 race wins across six seasons of racing. 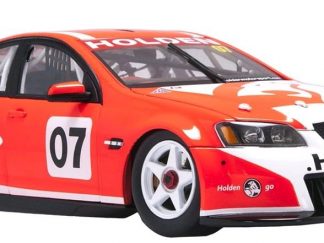