Since Holden won their first Australian Touring Car Championship race in 1969 at the hands of Norm Beechey aboard a Holden HK Monaro GTS 327, 599 more championship race wins have followed, with the 600th win claimed by Shane van Gisbergen at Wanneroo Raceway during the 2022 Repco Supercars Championship.

To commemorate this historic milestone, Authentic Collectables reached out to Peter Hughes to help us design a celebration livery to produce as a limited edition collectors model. Hughes, a GM Automotive Designer for many years and the man behind too many famous Holden liveries to mention, was the perfect person to design this model with us.

“When asked to create a celebratory livery for Holdens 600th championship win, my immediate thoughts were channelled to all the famous cues used on decades of winning factory Holdens,” Hughes said.

“The iconic black rear/white front draws inspiration from early Holden Racing Team years and splitting those elements is the flowing red Racing Lion in all its historic glory.”

“This is complemented by the VF type cropped lion on the hood giving the design even more of a factory feel. Red details tie everything together, finishing off a simple yet very dynamic livery, symbolising power, performance and success. I wish this car had raced, it just screams Holden Motorsport from any angle.”

The stunning Holden livery also features numerous small details which have been incorporated into the design. The 600 race wins on the doors and windows are obvious, while the roof also features a bold 600 wins graphic which incorporates the 3 main model nameplates to have won – Monaro, Torana and Commodore along with the 1969-2022 dates signifying the years of the first and 600th win. Another interesting detail is the last names of the top 10 drivers with the most Holden race wins listed on top of the boot lid. A final touch that also had to be included is the Australian flags on the rear quarter windows!

As many keen Holden followers would know, the 600th win came aboard a ZB Commodore, but to celebrate the achievement of winning 600 championship races overall, we opted to use the VF Commodore due to it being the most successful race winning Holden model, taking out 108 of those 600 wins while also being the last widely recognised ‘Australian’ Commodore.

Produced in high quality die-cast with detailed interior, opening bonnet and all four doors in a limited edition with an individually numbered Certificate of Authenticity, signed by Peter Hughes.
Code: ACD18H22SE1 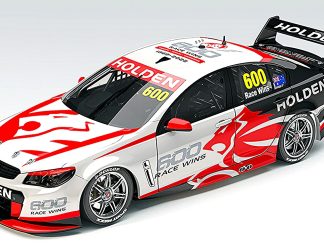