This model will be produced in die-cast with fully opening parts other than the boot.
As part of their year long 25th Anniversary celebrations, the Holden Racing Team unveiled a tribute livery that was raced at the 2015 Townsville 400. The two HRT Holden VF Commodores featured a modern representation of the livery that was seen on Peter Brock’s HRT VS Commodore in 1997 when he drove that car to claim his last ever V8 pole position, race and round wins. As one of HRT’s most celebrated drivers over their 25 year history, it was fitting that both Garth Tander and James Courtney raced their 2015 cars featuring this iconic livery as a tribute to the King of the Mountain.

Interestingly, the modern re-creation of this livery for the 2015 HRT VF Commodore was rejuvenated by the designer of the original livery in 1997, Peter Hughes – who still design’s HRT’s impressive liveries to this day.

“HRT’s 1997 livery is one of my all time favourites. It was the first HRT Commodore I designed and is sentimental to me being Brock’s final year,” Hughes said. “I’m always excited to see HRT liveries come to realisation, and I’m proud to bring back this design.”

Racing a HRT Commodore featuring a livery last seen on a car raced by one of Australia’s most iconic motorsport names was always going to draw much fan fare and anticipation with HRT fans eager for a strong showing on race day. It’s fair to say that both Tander and Courtney did a respectable job keeping the cars towards the front of the pack with both drivers delivering top ten finishes across the weekend, with James finishing on the podium in Race 17 in second place. 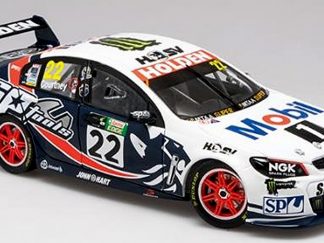