However, the five-time series champion and his then-team Gibson Motorsport were forced to fight hard in the mid-1990s when cigarette advertising was banned in Australia.

Gone were the millions and millions of dollars that had made Fred Gibson’s team the best race team in the country in both Nissans and V8 Commodores.

That left the team exposed for 1996 and Skaife ran in the first two rounds of the Shell Australian Touring Car Championship without a major sponsor.

However, the team landed a deal with video games company SEGA that saw Skaife adopt a yellow and white paint scheme on his Yokohama-shod VR Commodore.

The new sponsorship deal for the 1992 and 1994 ATCC champion began at round three at Bathurst, the last time a sprint round of the championship was held at Mount Panorama. 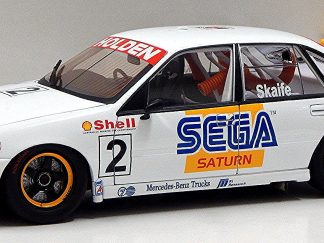