There were five other Chargers competing in the series along with Ford GTHO Falcons and Holden XU1 Toranas.

Right from the very first race, Leonard’s Charger was much quicker that the other Chargers. GTHOs and XU1s. He quickly broke the production lap record on every circuit in New Zealand.

Ford even sent out Allan Moffat in the factory Ford GTHO Falcon to catch the flying Kiwi Charger. To their horror, the Charger proved to be faster on two occasions they met at Wigram and Teretonga. Moffat famously said at the time, “You New Zealanders have the fastest chargers in the world, I just could not have gone any faster”.

Leo Leonard is regular honoured guest at the annual Chrysler on the Murray and is revered by Chrysler fans on both sides of the Tasman Sea.

The Chrysler Valiant Charger remains the most successful production race car ever on New Zealand circuits. 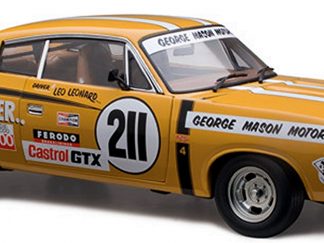