Cameron Waters is without question, one of the brightest talents competing in the Supercars Championship.
From winning championships in Formula Ford and the Super2 series before graduating to winning races, claiming poles and Bathurst 1000 podiums in Supercars, his motorsport resume has plenty of achievements.
In recent years, Authentic Collectables have produced various Monster Energy Racing Fords driven by Waters and we’re very excited to announce another one to add to the collection – the FGX Falcon he drove to 4th place at the 2016 Supercheap Auto Bathurst 1000 alongside co-driver Jack LeBrocq.
Other than the impressive result which came in his first full time season in Supercars, the livery is the real standout feature of this car and one that is different to all of the Monster Racing cars seen in recent years. The grey grunge pattern used across the rear sections of the car along with the bright green highlights really make this a standout livery and a nice point of difference for collectors.
This model is scheduled to be produced in die-cast with opening parts in a limited edition with a numbered Certificate of Authenticity.
Code: ACD18F16M 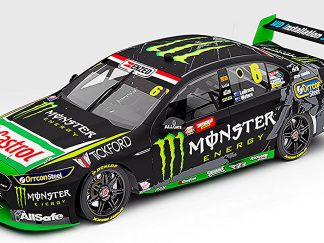