Now in his fourth season of main game Supercars racing, the 2017 Sandown 500 winner Cameron Waters has taken to the new Mustang like a duck to water. Five Podiums in the first half of the season, including a second place at the Adelaide 500 prove that Waters will be a future star of the sport.

Don’t miss Waters’ 2019 season car in 1:43 scale which is scheduled to be produced by Authentic Collectables in high quality sealed body die-cast with clear windows, detailed interior and will be presented in a clear display case. This model will be produced in a limited edition.

Information
Testimonials
I have received the products (Mad Max models) today. I liked the products very much. Thank you for the careful packing and quick transaction.
Yukiya
Japan
I just wanted to let you know that I received Order #1687 for my 3- 1:43 car order and couldn’t be more pleased with both the cars and their boxes. Thank you very much. Have a g’day down under. 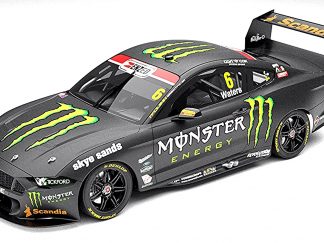