It is a model that is an extremely interesting concept and is sure to impress racing and concept car collectors alike. It is the Red Bull X2010 Prototype bearing the name of two time Formula 1 World Champion, Sebastian Vettel.

In a world where modern professional racing is restricted by regulations, the Red Bull X2010 Prototype is a machine born from a fantastic “what if” dream of Gran Turismo:

“What would the fastest racing car on Earth, free of any and all regulations, look like?” And the only way to experience it is in Gran Turismo 5. Initially the Red Bull X2010 Prototype was a single-seater canopied prototype wing car with covered front wheels. Powered by a 1500ps direct-injection V6 Twin Turbo, on paper the performance would have been spectacular, producing a top speed of 400km/h (248.6mp/h) and a maximum lateral acceleration of 6G. But once Red Bull Racing was brought on board to be a partner, the Red Bull X2010 Prototype really took off.

Adrian Newey, master aerodynamic engineer and Red Bull Racing’s Chief Technical Officer, suggested “Fan Car” technology, a long-held dream of his, be added to the design of the Red Bull X2010 Prototype. A “fan car” is a vehicle having a fan mechanism which forces the air out from underneath the car to reduce air pressure under the car’s floor. The resulting suction draws the car to the ground surface and creates a massive amount of downforce and because it can create downforce regardless of the vehicle’s current speed, it dramatically raises its cornering speed capability even in low speed corners. Fan cars are not new to the automotive world, and the technology has already been tested and proven. The Chaparral 2J fan car entered, first appearing in the 1970 Can-Nam series, was so fast that it was banned after just 1 season.

Even in the F1, where tremendous speed is the name of the game, the BT46B fan car that was entered in 1978 by Brabham went on to dominate the race with extreme speed, only to be banned after its debut race.

Thanks to the insight of Mr. Newey, the Red Bull X2010 Prototype design was transformed. A large fan was added to the rear end of the body to implement the Fan Car technology. Plus, Newey provided additional input into the design of the front and rear wings and rear diffuser, dramatically refining the vehicle’s aerodynamics. As a result, the virtual Red Bull X2010 Prototype was able to achieve an astonishing level of performance. Its new top speed was 450km/h (279.6mp/h), with a maximum lateral acceleration reaching up to 8.75G, pushing the vehicle to the very limits of what a normal human body can withstand. As a comparison, this is more G-force than a fighter pilot feels during full afterburner, and more than astronauts experience during a shuttle lift-off.

The driver who performed the shakedown test of the virtual machine inside Gran Turismo 5 was the world famous Sebastian Vettel. In his very first run on a virtual recreation of the Suzuka Circuit, he beat the record time for the course by over 20 seconds. And in the test drive on the Nurburgring GP Course, he marked a record time of 1 minute 4 seconds, drawing out the incredible potential of the Red Bull X2010 Prototype. The dream of creating the fastest racing car ever has been realised thanks to the collaboration between Polyphony Digital and Red Bull Racing.

Autoart has long been partnering with Polyphony in creating die cast model cars one can find in the Grand Turismo video games. Once again, the Red Bull X2010 is made into a 1:18 scale die cast model. The aerodynamic body shape is accurately replicated to the finest detail with the computer data provided exclusively by Polyphony. 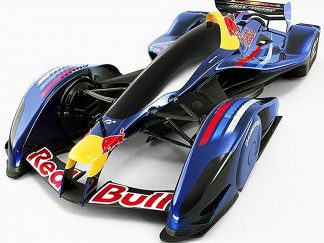