A chance meeting with Triple Eight Race Engineering boss Roland Dane saw Casey Stoner become a regular in the Team’s garage during 2011. Hinting as far back as 2010 that he wanted to pursue a future in V8 Supercars. Stoner entered the Dunlop Development Series in Craig Lowndes’ 2010 Bathurst Winning VE Commodore.

Stoner’s first attempt at the street circuit showed promise, with both practice sessions concluding with him in the top 10. Qualifying saw Stoner make his fastest lap on his final lap with a time good enough for 12th position, just over 1 second away pole.

Starting from the sixth row on the grid and making his way into the top – 10 within four laps of Friday’s race, Stoner’s V8 debut had got off to a flying start. But going into pit straight corner Stoner locked his wheels forcing him to go wide. He then attempted to complete the race conserving the tyres, but the flat spot was too severe and eventually the tyre could take no more and burst on turn three of the 12th lap, ending Stoner’s first assault on the VS Supercar Dunlop Series. 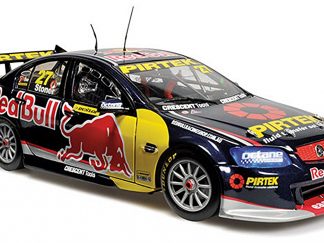