PETER Brock driving something other than a Holden during the course of his illustrious career was not as much of an eyebrow raiser as some may think.

He drove BMWs and even Ford Sierras in between stints aboard a General Motors product, but it was his decision to drive a Volvo 850 Super Tourer in the 1996 two-litre series that got plenty of attention – particularly from his superiors given he was a Holden Racing Team V8 pilot at the time!

The nine-time Bathurst winner combined his programs for the year, though it caused some serious distress and politicking. But racing was what fuelled the ‘King of the Mountain’ and for the ’96 season he was armed with an ex-British Touring Car Championship Volvo 850 sedan run by George Shepheard, who had masterminded the Repco Round Australia Commodore 1-2-3 that Brock led home in 1979.

The Tom Walkinshaw Racing-built, five-cylinder howler was up against the works Diet-Coke BMWs of Paul Morris and Geoff Brabham as well as the four-wheel drive Audi A4s of Brad Jones and Greg Murphy and a handful of strong privateer entrants. After debuting in the non-championship events at Albert Park and at the Gold Coast Indy, Brock and the distinctive red #05 850 made their championship debut at Amaroo Park and, despite a new aero kit that arrived from Europe that week, the Volvo was down on pace and finished sixth in Race 1 and retired from Race 2 with a failed front wheel bearing.

Round 2 took the teams to Lakeside in Queensland and luck was not on Brock’s side. Oil left on the road from Jones’ blown Audi sent him straight off the road, and copping a hit from Geoff Full’s Peugeot that arrived behind him. Repaired for Race 2, Brock was able to salvage sixth place but sat a distant ninth in the points. Round 3 was back at Amaroo Park in Sydney and things started to improve, with a fourth place in Race 1 behind Jones, Morris and Brabham, but another retirement in the second race with suspected CV joint failure. “Last time here I kept going and it literally cost thousands of pounds for a new part so this time I wasn’t going to take any chances,” Brock told Motorsport News magazine post-race. The halfway mark of the season came at Mallala but more mechanical gremlins would cut down the improving pace of the ex-Rickard Rydell machine. After launching to a great start in Race 1, he was pit-bound on the opening lap with a failing fuel pump, though would recover for fifth in Race 2. Round 5 was at Winton and the tight rural circuit wouldn’t see a change of luck for the 850. After finishing seventh in Race 1, Brock found himself caught up in an opening corner multi-car pile-up in Race 2, and again the Volvo was damaged and a retirement. The wide and sweeping curves of Phillip Island hosted Round 6 with Brock eighth in Race 1 and a much stronger fourth in Race 2, though he still was lagging seventh in the points and 100 behind leader Jones’ Audi. The championship then paused for a non-points paying event at the Bathurst 1000 as support to the V8s with Jim Richards filling in for Brock, who elected to focus on his HRT commitments. Richards would prove successful, winning the wet final race on Sunday morning prior to the beginning of the main race.

The title chase resumed for Round 7 at Lakeside and a switch from Dunlop to Michelin tyres allowed Brock to get even closer to the dominant BMWs and Audis. Fifth in Race 1 was a nice entrée to Race 2, where Brock survived a start line accident and subsequent restart to lock onto the back of Morris and fall short of his first Super Touring win by less than a second. The change in rubber had re-vitalised Brock and the Volvo and given it a real sniff of further strong results come the final round on the short track at Oran Park under lights. While Jones and Audi were claiming their first title, Brock picked up third and seventh to round out the 1996 season, which placed the Volvo driver sixth in the championship behind Jones, Morris, Murphy, Brabham and top privateer Steve Richards. Brock would focus on his HRT V8 program in 1997 and Jim Richards would take the wheel of the Volvo 850 for the new season. But there was no doubt that a single season of Brock racing with the Swedish manufacturer had given it ‘street cred’ it could have only ever previously dreamed of.

This model will form part of the Biante Peter Brock Collection so ensure you place your orders to avoid missing out on this great model. 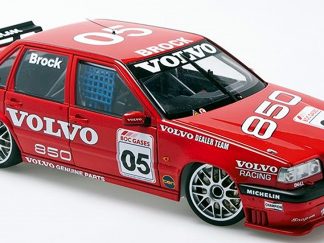