The roots of the quarter mile, asphalt pounding Dodge Challenger MOPAR Drag Pak cars dates back to the 1960s when Dodge introduced their Max Wedge cars that dominated drag strips across the country. This continued into the late 60s and early 70s with the massive 426 HEMIs being installed into Plymouth’s Cuda and Dodge’s Darts and Challengers. Then, in 2008, Dodge announced they were bringing back their first Dodge Challenger MOPAR Drag Pak in 40 years! The late model Drag Pak Challengers were an instant success with racers around the country. The Drag Pak Challengers would win numerous races and set numerous records. With all of this success, it begs the question, THAT THING GOTTA HEMI!!!?

So, without further ado, ACME is pleased to present our 1971 Dodge Challenger R/T – MOPAR Drag Pak edition in celebration of Dodge’s all new 2021 Challenger MOPAR Drag Pak that is finished in an awesome white, red and blue paint scheme! In addition to the amazing decoration package, this model features a full roll cage, race seats, our all new Drag Outlaws drag wheels, drag tires, a fully plumbed and wired 426 HEMI and much much more! 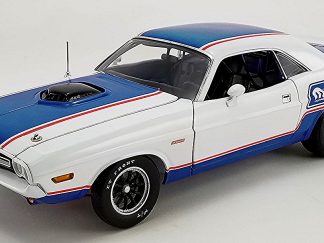