Tim Slade made his return to a full time drive in the Supercars Championship for the 2021 season with CoolDrive Racing in a Tickford built Ford Mustang GT.
Featuring an absolutely knock-out blue livery, Slade arrived at the season opening Mt Panorama 500 and instantly turned heads – and it wasn’t solely due to how magnificent the #3 entry looked!
The new season started in a very promising fashion after a massive off-season which saw the team essentially become a fully self-contained and run race team. Slade qualified strongly for Race 1 to see himself starting on the front row in P2 and a podium finish was looming before an unfortunate missed gear in the later stages of the race locked the rears and saw Slade spear into the fence at Forrest’s Elbow, leaving the car a wreck.
Since the dramatic exit from the opening round, the positives have all been there to see. The team has slowly but surely improved as the year progressed with multiple top 10 finishes. Results aside, there’s no argument that this car is truly one of the best looking challengers on the grid in 2021. The striking blue Mustang is going to look absolutely exceptional in scale replica form and this season model will be based on the NTI Townsville 500 livery.
Produced in die-cast with fully opening parts in a limited edition with a numbered Certificate of Authenticity. 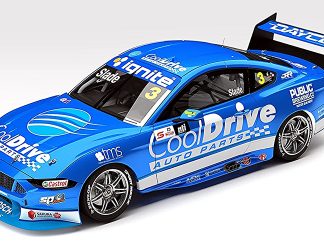