The 2021 Repco Bathurst 1000 saw Erebus Boost Mobile duo Brodie Kostecki and David Russell finish on the podium at the Great Race for the first time in their careers, taking out 3rd place.
Featuring a simply awesome black, grey and orange livery with an aggressive graphic kangaroo element down the side of the doors working in tandem with principal sponsor Boost Mobile, the #99 Commodore was one of the best looking cars on the grid.
Come race day, the cars pace matched its looks. Starting on the fifth row of the grid, Russell set the Boost Mobile Commodore up from the start, claiming five spots during his opening stint.
Fast forward a few stints to lap 94, and Russell once again earned his pay, holding off Craig Lowndes for P4 all the way until he took his final stop, handing the car over to Kostecki for the run home.
Kostecki then took his final stop for fuel and tyres on lap 139, moments before a Safety Car was called when Anton De Pasquale stopped at the exit of the Cutting. Shane van Gisbergen and Cameron Waters stopped under yellow flag conditions and ultimately made Brodie’s fight for the podium even harder!
The #99 lost track position though lapping faster than anyone on track, Brodie was chasing down Waters for P3 before an issue with van Gisbergen’s right front tyre saw him drop down the grid with Brodie taking advantage.
Brodie flew across the top of the mountain and past van Gisbergen, clipping the wall on the way through at The Grate, and taking the final spot of the podium in an exceptional charge home for a memorable finish.
It was the 2nd podium finish for Kostecki for the season in his first year as a full time driver in the Supercars Championship.
Produced in sealed body resin with clear windows and detailed interior in a limited edition with an individually numbered Certificate of Authenticity. 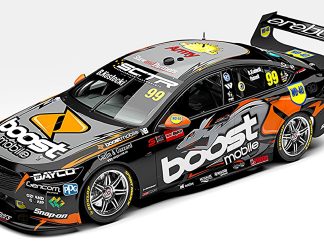