The arrival of the new five-litre touring car regulations for the 1993 season prompted an instant surge in success for Glenn Seton and his Peter Jackson team, which finished 1-2 in
that year’s Australian Touring Car Championship with the team owner and 1980 F1 World Champion Alan Jones sweeping all before them in a dominant display for Ford fans.
Seton’s championship defense in 1994 came at the wheel of the #1 Peter Jackson Racing Falcon EB, a car that had been built new for the second half of the previous season, and
ultimately took him to runner-up honours in the ’94 title chase. Apart from its new number – to signify Seton as national touring car champion – his car, along with all Falcon EBs for 1994, looked slightly different with the addition of small winglet scoops on the front spoiler for the new season. They were somewhat unsightly, but were added in a bid to given the Ford enhanced front downforce and make it again competitive with Holden’s Commodore after the VP model swept all before it at Bathurst in 1993.
Seton’s title defense started strongly enough in the opening round at Amaroo Park in Sydney, finishing second in both heats and overall to the ultra-fast Mark Skaife’s Winfield
Commodore, but it came unstuck in the next round at Sandown.
Seton was involved in a coming together on the opening lap of the second race that sent him off into the barriers on the first lap. He was able to rejoin, albeit with a damaged car,
and eventually finished 17th – a fourth place in the opening heat was enough to leave him ninth for the round.
The Victorian-based Seton bounced back in the next round at Symmons Plains to finish runner-up for the round to runaway title leader Skaife and used his home test track
knowledge of Phillip Island to score victory in the next round (with a pair of race wins) to start moving himself back up the championship points table.
Seton scored pole position for round five at Lakeside in late April and led the early stages of Race 1 until hometown hero Dick Johnson swept through into the lead. However soon
after Seton found his Bridgestone tyres blistering and tried to get into pit lane, only to cut across the nose of the chasing John Bowe and be sent into a spin and across to the infield.
The reigning champion finished 13th and eighth in the following race to be 10th for the round and on the back foot yet again in his chase for the championship.
He won the next round at Winton (again winning both races, as had been the case at Phillip Island) but came crashing back to earth at Eastern Creek when he spun in Race 1 and
found himself stranded upon a kerb and unable to rejoin the race.
He sprinted from the back of the grid in Race 2 – zooming from 25th to finish fifth – but his title hopes had all but disappeared given points leader Skaife was again on the podium.
They completely nosedived in the next two rounds by finishing sixth overall at Mallala (after failing to finish Race 2 with engine problems) and 13th at Barbagallo when engine
dramas took him out of Race 1 and distributor problems took him out before completing a racing lap in Race 2.
The best Seton could hope for in the championship when he arrived at Oran Park for the final round was second in the points behind champ-elect Skaife – and he duly delivered.
The Ford pilot was on fire at the Sydney layout, sweeping home to win the PJ Dash for Cash, both races and the round overall clear of Peter Brock and Dick Johnson.
The result also meant Seton pipped Brock to finish as runner-up in the championship to Skaife by just six points.
It was the second time that Seton had finished as runner-up in the ATCC after being beaten to the crown in 1987 by Jim Richards.
However, the Ford hero would go on to claim another championship win for his own Falcon team in 1997 in Ford Credit colours and later be inducted into the Supercars Hall of Fame
in 2009.
Produced in die cast with fully opening parts and high detail, this model will be produced in an exclusive limited edition and will come with a numbered Certificate of Authenticity. 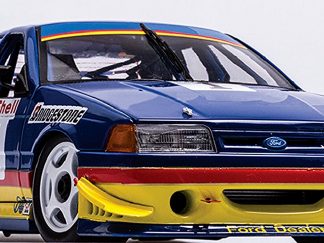