Leading from start to finish on September 8, Allan Moffat scored an impressive win in the ‘Sandown 250’, second round on the Manchamp for 1974, and so scored a great equaliser for Ford in the Championship. Driving a much reworked Falcon GT and having his first competitive drive or some months, Moffat was fairly untroubled in his win, as various troubles beset the opposition.
After the usual parade and warm up laps the field was sent on its way, with Moffat blasting to the lead between the two Toranas. Bond and Brock fought for second position until Bond relaxed on the chase for first position and let Brock fight. Moffat was able to keep the lead and slowly move away from Brock securing first position. 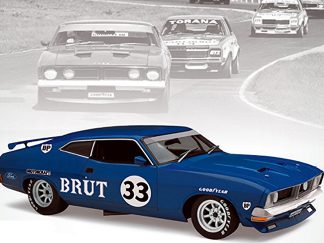