At the start of the sixties, a fierce rivalry was born that would quickly become part of auto-mobile mythos. In Maranello in Italy, a small-time artisan by the name of Enzo Ferrari was defying a giant of the car industry. In Dearbom, a suburb of the city of Detroit, Ford was livid. Following a lengthy negotiation, the Italians refused to sell Ferrari to Ford. For the American manufacturer, their revenge would come on the track. The decision was taken to develop the ultimate weapon to challenge Ferrari at Le Mans: the GT40. The latter was created using a Lola chassis, at owes its eponymous title due to its height of only 40 inchs. After two failures in 1964 and 1965 a humiliation for Ford the latter went on to win Le Mans from 1966 to 1969. 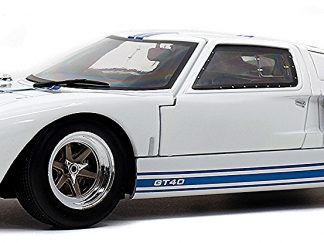