Given Australia’s relatively small population during the seventies compared to other larger nations, our local car manufacturers had a tendency to produce one new body style of a popular nameplate and then release new models with small upgrades and modifications across a number of years in order to make local production viable. The Ford range featuring the XA, XB and XC Falcon’s is one particular example of this trend and had impressive results.

The XB Falcon was dubbed “The Great Australian Road Car” and replaced the previously released XA model. As was the trend during the “Golden Era” of Australian car manufacturing, the XB featured small changes including more aggressive styling, new colours and minor trim variations. The GT variant included four-wheel disc brakes but it was the striking colour combinations that were the GT’s finest feature. The “Power Bulge” on the bonnet which the two bonnet scoops were integrated into, the wheel arches and body trim were all generally painted in a beautiful contrasting colour to that of the overall paint job which combined for a striking, powerful look for the road.

The Red Pepper XB GT is a fine example of how well this contrasting colour scheme worked for the range. With the bold Red exterior working in perfect combination with the Black trimmings, this was a muscle car that would turn heads. 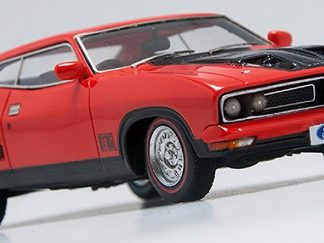