The Sandown 500 Retro Round is fast becoming a fan favourite event on the Supercars calendar with teams up and down pit lane celebrating the history of the sport with retro inspired liveries, team uniforms and more.

Freightliner Racing’s 2016 retro inspired livery was a unique take on an iconic car. The inspiration behind the livery was the Holden Dealer Teams’ 1968 Holden HK Monaro GTS 327 driven to 2nd place at the Bathurst 500 by Jim Palmer and Phil West – albeit in a different colour scheme. Perhaps the most retro feature on this livery was the use of Freightliner’s vintage ‘boomerang’ logo which certainly completed the livery really nicely.

Other than the wide selection of interesting retro liveries, the 2016 running of the Sandown 500 will perhaps be remembered most for the huge crash suffered by GRM’s James Golding on the opening lap which resulted in a safety car and eventually a red flag in order to make repairs to the tyre barrier such was the huge impact of the incident. After qualifying in 8th, Ash Walsh had a blinding start moving the #14 Commodore up to as high as 3rd place. Unfortunately a drive through penalty ultimately wrecked the teams chances on the day.

Produced by Authentic Collectables in high quality die-cast with detailed interior, opening bonnet and all four doors. This model will be produced in a limited edition with a numbered Certificate of Authenticity. 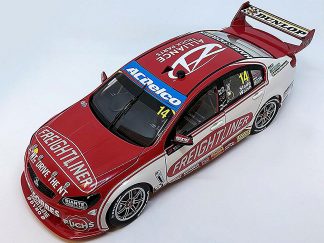