A four-time winner of the Armstrong 500 at Phillip Island and then Bathurst, Bob Jane goes down in Australian motor racing history books as one of the all-time greats.

Having paired with Harry Firth to claim the 1961 and 1962 races at the first home of what later became known as ‘The Great Race’, Jane won two more in the next two years in Cortinas at Mount Panorama with Firth and then George Reynolds. Come the start of the 1970s and Jane had not competed in what had by then become the Hardie-Ferodo 500 since 1967 as he instead elected to focus on other forms of racing than Series Production rules under which the Bathurst classic was run.

However, Jane returned to the Mountain in 1971 behind the wheel of one of the new six-cylinder LC Torana XU-1s. In doing so it was also his first attempt at the Bathurst classic behind the wheel of a Holden. While many of his rivals, including Allan Moffat, Peter Brock and Colin Bond, elected to drive the 500-mile race solo, Jane paired up with his regular Bob Jane Racing driver John Harvey. The former open wheeler and sportscar racing star joined his team boss in a Torana much improved over that which Holden teams had first raced at Bathurst the year prior.

All told, the little Torana was by then producing up to 180 horsepower (134kW) but it would still not be in the outright class thanks to the unique class structure system (based on a cost/engine capacity formula) that placed it in Class D up against the E38 Chargers.

Jane arrived at Bathurst as the reigning Australian Touring Car Champion, though this counted for nothing at the 500-mile Series Production race given his ATCC-winning Camaro and its title rivals competed under Improved Production rules. While the big GTHO Phase III Falcons dominated at Bathurst and defending race winner Allan Moffat claimed pole position, the Jane/Harvey #33 Torana qualified a lowly 29th on the grid after a range of troubles. They were also seventh fastest of the 11 LC XU-1 Toranas entered in that year’s race.

Sadly their day would come to an early end with 50 of the 130 laps completed after transmission problems forced them to retire. After starting the race with no third gear eventually they lost all four and their day was done as the Holden Dealer Team’s Colin Bond won Class D and Moffat’s Falcon won the race overall.

For Jane he would return to the Bathurst classic just three more times, making his last appearance in 1977 in a Torana A9X. Harvey would make another 15 starts, finally claiming victory in the race alongside Peter Brock and Larry Perkins in 1983 for the Holden Dealer Team. He made his last Bathurst 1000 start in 1988.

The 1:18 Scale Holden LC Torana GTR XU-1 driven by Bob Jane and John Harvey in the 1971 Hardie-Ferodo 500 is yet another piece of the puzzle when it comes to the long and celebrated history of Australia’s Great Race. Produced in diecast with opening parts, high detail and finishing, this limited edition model is a must have for fans of Australian motorsport. 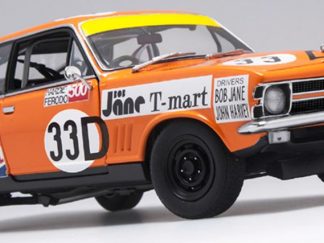