PLEASE NOTE: THIS MODEL HAS A RESIN BODY, WITH NO OPENING DOORS, BONNET or BOOT

Scott McLaughlin’s very first solo drive in the V8 supercar series. After securing the 2012 V8 development series championship, it was to be a call up from Gary Rogers that would be the icing on the cake for McLaughlin’s 2012 season. After the sweltering heat at the Homebush street circuit on Saturday, Frenchman Alexandre Premat was severly dehydrated and exhausted. Rogers gave young Mclaughlin the keys to the GRM Commodore for the Sunday race. Doing a stella job and finishing 17th this was the vessel to giving Mclaughlin his permanent drive in the 2013 season with GRM. 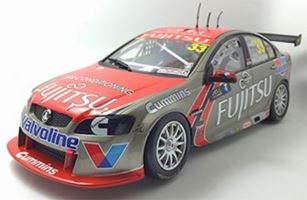