Kiwi Fabian Coulthard has established himself as one of the best recent racing exports of New Zealand in the V8 Supercar era. After originally appearing on the Australian motorsport radar at the Albert Park Formula Ford support event in 2002, Coulthard raced overseas before returning back to Australia to compete in Porsche Carrera Cup. He won the Rookie of the Year Award in 2004 and returned in 2005 to claim the title. Signed as an endurance driver with Tasman Motorsport in 2004 in V8 Supercars he ran part-time schedules with Paul Morris Motorsport before signing with Paul Cruickshank Racing in 2008 and moving to Walkinshaw Racing for two seasons in its Bundaberg Racing entry.

In 2012 the Kiwi made the move to Brad Jones Racing and became the pilot of the team’s #14 Lockwood Racing Commodore entry, one of three cars run by the Albury-based squad. His association with his new team began well on the streets of Adelaide with a sixth-placed finish in his opening hit-out, backed up by another top 10 result on the following day. A tough weekend at Symmons Plains was followed by the event in Coulthard’s homeland in New Zealand, which netted a ninth and a fifth placed finish on the Hamilton street circuit. Things continued to gel for the Coulthard/Lockwood line-up at Barbagallo in Perth with a fourth-placed finish before he came crashing back to earth at Phillip Island, where power steering problems and contact with Steve Owen hampered his Saturday race and a collision in the pits, and a subsequent flat tyre on Sunday left him way back in 24th place.

A fifth-placed result on Sunday in Darwin showed that the potential was there and a fourth-placed finish in the Townsville opener further underlined that achieving a podium result seemed to be a given. Two more top-five results at Queensland Raceway helped give momentum but the wheels started to fall off a little in the endurance races. A solid weekend at Sydney Motorsport Park set the team before the first endurance event at Sandown, where veteran David Besnard joined Coulthard as co-driver. Unfortunately the Queenslander crashed the car during Friday practice, prompting a late-night rebuild job by the BJR crew. The car simply didn’t have the speed in the 500-kilometre race, eventually finishing 15th but one of 17 cars on the lead lap.

The team’s chances at the biggest race of the year, Bathurst, also took a nose-dive when steering dramas sent Besnard off the track at McPhillamy Park, where he was bogged in the sand trap. The car eventually limped back to the pits, the steering rack was changed and he and Coulthard continued on to finish 23rd, 14 laps down on the winners. Frenchman Nicolas Minassian joined Coulthard for the special ‘international co-driver’ event on the Gold Coast, though the team’s run of bad luck in the endurance races continued. The Le Mans regular stalled on the grid on the first restart and was collected while stranded by a following car. The repaired car finished 10th in the Sunday race, although the weekend dropped Coulthard to 11th in the championship.

The title chase moved to Yas Marina Circuit in Abu Dhabi before arriving at the Lockwood team’s home track at Winton in north-eastern Victoria, where Coulthard finished 14th and 12th.

The final round in Sydney gave the opportunity for Coulthard to still lock down a top 10 finish in the championship, though a double ‘DNF’ meant that went out the door and he was forced to settle for 11th in the final points. Throttle problems took him out of the Saturday race and a 15th-placed finish on Sunday meant that he was topped for 10th in the championship by former Walkinshaw teammate James Courtney. Nevertheless the result was still Coulthard’s best in the V8 Supercars Championship and built a solid platform from him to build in 2013, when he’d claim his first V8 Supercar race win in the first season of the category’s new ‘Car of the Future’.

The 2012 #14 Lockwood Racing Commodore VE II model by Biante Model Cars is based upon the livery carried by Coulthard in the Winton round of the 2012 V8 Supercars Championship. Please place your pre-orders as soon as possible to ensure you don’t miss out on this limited edition V8 Supercar. 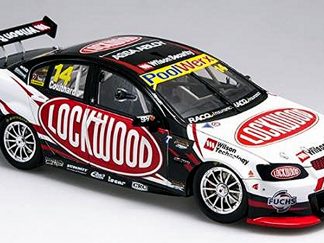