Team BOC Holden Commodore VEII driven by Jason Bright in the 2012 V8 Supercars Championship Season. There is no doubt that the #8 Team BOC Commodore entry is special in the V8 Supercars Championship. Driven for two seasons by the late, great Kiwi Jason Richards in 2009 and 2010, the number, sponsor and team combination is a familiar one that continues to be carried by another Jason in Jason Bright.

The 1998 Bathurst winner joined the Brad Jones Racing squad in 2010 as teammate to Richards and moved into the Team BOC entry in 2011 after Richards was diagnosed with a rare form of cancer that would ultimately claim his life just before Christmas later that year. The following 2012 season would thus be an emotional one for BJR as they lined up on the grid for the first time since the passing of their former driver and great friend. Bright remained behind the wheel of the #8 Commodore as part of a three-car BJR line-up, joined by Fabian Coulthard in the #14 Lockwood entry and David Wall in the #21 Wilson Security car. All three cars would carry a special tribute to Richards, a ‘JR Star’ prominently positioned on the B-pillars of each car as a reminder of their departed friend.

Bright’s season began badly at the Clipsal 500 in Adelaide where he slipped up on oil left by James Courtney’s HRT Commodore and crashed at the high-speed turn eight. The Team BOC crew worked through the night to get the car onto the grid on Sunday and Bright salvaged a 16th placed finish. A tough weekend at Symmons Plains was followed by another one on the Hamilton street circuit in New Zealand before the teams moved to Barbagallo in Perth.

The site of a race win for Bright the previous season, the Western Australian circuit helped him and the Team BOC outfit build some momentum for 2012 with three top 10 finishes, highlighted by a fourth-place result in the final race. Phillip Island would see Bright’s first podium result of the season as he claimed third in the Sunday race behind Will Davison and Craig Lowndes and move to 11th in the championship; he’d been on target for a podium on Saturday before being tagged into a spin by Lowndes. A pair of 13th placed finishes in Darwin was followed by a tough run in Townsville where an accident took Bright out of the Saturday race. He finished 10th on the Sunday. Queensland Raceway proved problematic while a return to Sydney Motorsport Park (formerly Eastern Creek) netted a pair of top 10 results on the eve of the endurance races, where Andrew Jones would again partner Bright in the #8 Team BOC entry. They finished 13th in the Sandown 500 before a tough weekend at Bathurst. A jammed seatbelt in a pit stop on lap 82 of 161 dropped the #8 Commodore from fifth to 16th but the crew had recovered the ground when the Safety Car appeared soon after. However, disaster struck when Jones reported a problem with the steering and he ran off at Murray’s Corner. The car was repaired and ultimately finished 21st and three laps down.

Frenchman Stephane Sarrazin, experienced in Formula 1, World Rally Championship and the famous Le Mans 24 Hour, again returned for the Gold Coast to team up with Bright in the unique ‘international co-driver’ formatted event for the second straight year. He managed to survive the carnage of multiple standing starts on Saturday; finishing 12th from 21st on the grid, before suspension damage and an accident took them out of the Sunday event. Three short sharp sprint races at the Yas Marina Circuit in Abu Dhabi gave Bright no results to speak of and a damaged car after an accident took him out of the final, before he and Team BOC headed to their home track at Winton, where he salvaged a sixth place from the Sunday race. The final event of the season at Sydney Olympic Park would not be ideal for Bright either as an accident took him out of the Saturday race when he out-braked himself passing Frenchman Alex Premat. The contact with the wall dislodged the safety cut-off switch on the Commodore’s bonnet, meaning it rolled to a stop the following lap! Bright rounded out the season by finishing ninth in the Sunday race, enough for him to finish 16th in the final championship point score.

While the season had been something of a let down after a 2011 that had seen the Team BOC Commodore win races, it set the platform for Bright, Team BOC and race victories under the new Car of the Future rules introduced in 2013.

The 2012 #8 Team BOC Commodore VE II model by Biante Model Cars is based upon the livery carried by Jason Bright in the Winton round of the 2012 V8 Supercars Championship. 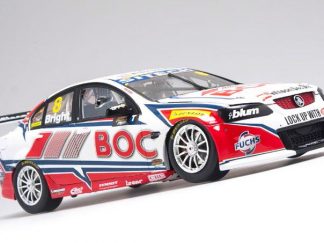