The Biante backed Nick Percat Holden VF Commodore was announced to the public in late March 2017. After a long association supporting and producing collectable scale models for Brad Jones Racing (and many other teams up and down pitlane), this was the first time a full Biante in house designed and branded livery would be seen on a Supercar as part of a championship round.

After coming off the biggest crash of his career at the AGP due to a brake failure, Percat and his Biante backed Commodore were yet agin in the race highlights for the wrong reasons at the Tasmania round. A wet track and atrocious visibility all combined when a racing tussle between Fabian Coulthard and Rick Kelly set off a chain reaction for essentially the back half of the field to create one of the biggest multi-car pile ups race fans have seen in recent memory, if not of all time. Unfortunately as racing goes, Percat was in the wrong place at the wrong time with this one and couldn’t avoid being hit from multiple angles. While the race was ultimately awarded no points in the ensuing chaos, the unfortunate, yet spectacular racing incident will certainly be remembered by race fans for a very long time.

This model will be produced in die-cast with fully opening parts other than the boot featuring high detail throughout in an exclusive limited edition with a numbered Certificate of Authenticity. 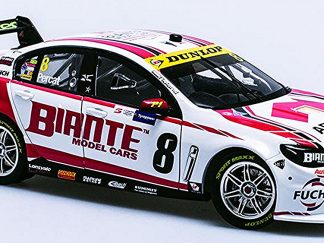