Holden VF Commodore Supercar in the livery of the very first Holden Bathurst Winning HK Monaro GTS 327. With the 50th anniversary of the famous win coming up for this years Bathurst 1000, we have worked closely with Holden on celebrating the special occasion. And now the last Australian made Holden has ‘retired’, we thought the VF would be the perfect model to honour the event.  Covered in the iconic original Warwick Yellow paintwork, we’ve tried to include as many little details in this version as possible to celebrate the original HK release, but also honour the VF as the final book end to the Australian produced Holden. There’s still many improvements to make to the prototype (fully black wheels, yellow headlights, wheel arch pin stripes, black interior etc.) but we’re quite proud of the early version and think the famous livery has wrapped itself around the VF quite well.

Features the standard opening doors and bonnet. Together with the usual excellent detailing and stunning paintwork, these models should not be missed.

Produced in die cast, these models will be set to an exclusive limited edition and comes with a numbered Certificate of Authenticity. 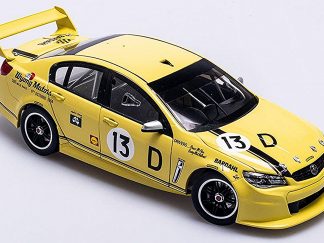