After five seasons with Brad Jones Racing, Nick Percat joins Walkinshaw Andretti United for the 2022 Repco Supercars Championship Season to drive the #2 Mobil 1 NTI Racing Holden ZB Commodore. It’s a return of sorts to the team that played a big part in starting Percat’s Supercars career where he won Bathurst as a co-driver with the then Holden Racing Team in
2011 alongside Garth Tander. It’s a feat that surely both Percat and WAU would hope to emulate and is certainly a possibility based on the teams blistering pace at the 2021 Bathurst 1000. Authentic Collectables are incredibly proud to become the official model car partner for Walkinshaw Andretti United. Percat’s sleek black, white and silver Commodore is a really neat livery and we’re looking forward to replicating it in scale model form for collectors and fans of this iconic team.
Sealed body die-cast with clear windows, detailed interior and will be presented in a clear display case with a stamped base and an individually numbered backing board which certifies the edition number of the model. 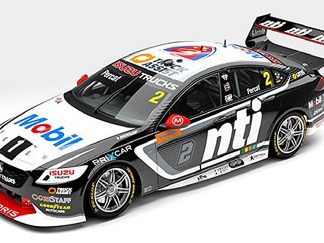