Limited edition large-format photographic print featuring the cars raced by Penrite Racing across the 2019 Virgin Australia Supercars Championship season. Erebus Motorsport / Penrite Racing are renowned for running a variety of liveries each season and 2019 featured an array of stunning looking cars. There were numerous highlights. Their season livery was stunning as always, the gold Bathurst 1000 cars looked amazing, their JPS BMW inspired Sandown retro livery was a massive hit and who could forget the KISS End Of The Road World Tour Livery raced at Gold Coast and Newcastle which rocked fans everywhere.

Measuring 1 meter wide and featuring impressive imagery of every livery raced by the team across the 2019 season along with images of drivers David Reynolds, Anton De Pasquale, Luke Youlden and Will Brown, this is the ultimate collectors print. Beautifully designed, it will be produced in an individually numbered limited edition of only 200 copies on 250gsm matte paper stock. 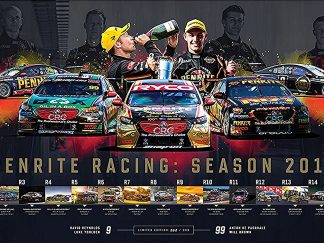