PremiAir Racing makes its debut in the Supercars Championship as a two car team and the new kids on the block in 2022. Formed by respected racer and businessman Peter Xiberras after purchasing Team Sydney / Tekno Autosports, the team was essentially put together in a remarkably short time frame just prior to the start of the season. If the success of this venture is being judged purely on how the teams cars look then it has already been a raging success. With Gary Jacobson driving the #76 Subway backed Holden ZB Commodore, the team has adopted a livery design that works extremely well across both of their cars despite featuring different major partners with very different colour schemes. The PremiAir Subway Racing Commodore is one of the best looking cars on the grid in 2022 and we’re excited to be replicating it in scale model form.

Produced in sealed body resin with clear windows and detailed interior in a limited edition with an individually numbered Certificate of Authenticity.

Ed
US
I have received the products (Mad Max models) today. I liked the products very much. Thank you for the careful packing and quick transaction.
Yukiya
Japan
I just wanted to let you know that I received Order #1687 for my 3- 1:43 car order and couldn’t be more pleased with both the cars and their boxes. Thank you very much. Have a g’day down under. 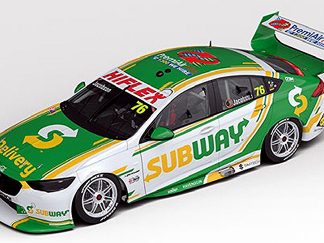