Caroll Shelby is a Texan pilot forced to stop his career in 1960 at the age of 37, due to health. He then took it into his head to design the ultimate American sports car, capable of competing with Ferraris or Porsches. He found a chassis at the English manufacturer AC Bristol. Combined with the Ford V8 engine, this base becomes a real winning machine. Faced with much heavier Corvettes, the lightweight Cobra does wonders in all states of America in search of speed. The 427 was launched in 1965 with a revised chassis, wider tracks and tires, inflated fenders and an engine of 427 cubic inches, or 7 liters, for an insane power of 410 horsepower. 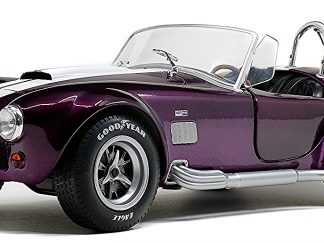