After three seasons driving full-time in the Supercars Championship with Erebus Motorsport, Anton De Pasquale scored a prime drive with the reigning champions and re-born Dick Johnson Racing / Shell V-Power Racing Team for the 2021 season.
With the new team came a new Ford Mustang and a new number too. De Pasquale was given the option of what number he would like to race under in 2021 and chose number 11 – a number he had success with during his junior years. As any Australian racing fan would know, the number 11 is legendary due to Hall of Fame icon Larry Perkins and the team received his blessing for them to bring ‘his’ number back to the grid and pass it on to the young gun.
De Pasquale settled in with his new team, was fast out of the blocks and has already claimed more podiums in 2021 than his previous three years combined. The strong results also included his first win with the team in Race 10 at the OTR SuperSprint at The Bend which also marked Ford’s 400th ATCC / Supercars Championship race win, which this model is based on.
Don’t miss this model which marks a significant milestone for not only the career of Anton De Pasquale but also for Ford and fans of the blue oval.
Produced in die-cast with fully opening parts in a limited edition with a numbered Certificate of Authenticity and will also include a scale replica of the ‘Ford News 400 Race Wins’ poster as an added display feature. 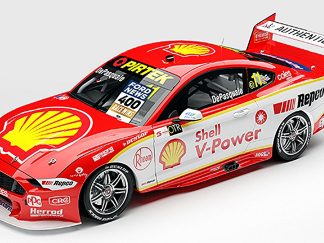