After a heart-breaking finish to the 2017 Supercars Championship Season which saw him narrowly miss winning the championship, 2018 proved to be the year of redemption for young kiwi superstar Scott McLaughlin and DJR Team Penske Shell V Power Racing Team.

The team’s mantra going into 2018 was ‘unfinished business’ and after a titanic battle with rivals Red Bull Holden Racing Team all year, business was ultimately concluded with McLaughlin taking out 9 race wins, 21 podiums and 13 pole positions on his way to claiming 3944 points, beating Shane van Gisbergen to the championship win by 71 points.

Dressed in the Coates Hire Newcastle 500 livery, scheduled to be produced in high quality sealed body die-cast with clear windows, detailed interior and will be presented in box style packaging. This model will be produced in a limited edition.
Code: ACD64F18CW 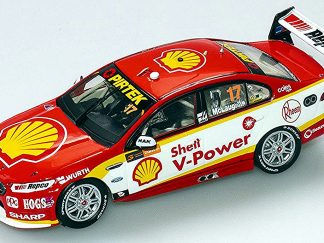