There’s no doubt that the now very familiar, perhaps iconic, Shell V-Power livery raced by the team over the past five years looks fantastic but it was very refreshing to see a big change when the team unveiled a spectacular one-off indigenous livery on both their Ford Mustangs for the 2021 Darwin Triple Crown.
Dedicated to Racing Together, a programme designed to give 12-to-18-year-old Aboriginal and Torres Strait Islanders an opportunity to pursue a career in motorsport as a driver or a member of a race team, the impressive livery was designed by Braedyn Cidoni who is a Racing Together team member. Also an aspiring driver for Racing Together, Cidoni’s design was inspired by the artwork of Allison Millcock and the result looked exceptional on the sides of the #11 and #17 Shell V-Power Mustangs.
When car 17 finally hit the track in anger in the Top End, Will Davison had polar opposite days over the race weekend. Saturday simply didn’t go to plan, a poor qualifying performance in slippery track conditions saw Davison start from 24th position to battle his way up to finish 14th.
Sunday however, went almost perfectly. Davison’s qualifying dramas the day before vanished as he set two blistering record laps to start from Pole for both the Sunday races to ultimately close the weekend with double podiums, finishing in 2nd place on both occasions.
Car 17’s trip to Darwin was ultimately a successful one and the indigenous livery was received with tremendous respect and fanfare. With many fans sending us messages requesting this livery to be replicated in scale model form, these models are sure to be a popular addition to collections for fans of the Shell V-Power Racing Team. 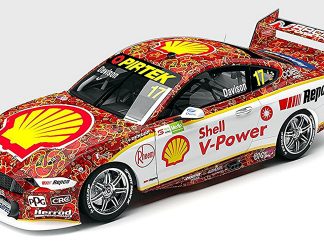