After initially being launched at the pre-season test day, Jonathon Webb’s #19 Commodore sported a striking Police-themed livery at the 2013 Clipsal 500 season opener in Adelaide. The concept was designed to promote a New South Wales Government initiative encouraging road users to obey 40km/h school zones. The look included the ‘don’t be naughty, obey the 40’ tagline along with a livery design that had obvious similarities with a police car.

The Tekno Supercar certainly featured a different look compared to what you would usually see at the track but it was one that was unique and is a nice point of difference for collectors. Webb’s results weren’t too bad either, finishing in the top 10 for both races across the weekend. 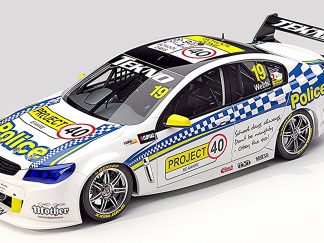