Mark ‘Frosty’ Winterbottom will always be remembered by Ford fans as a phenomenal driver who delivered them a great deal of relief in the form of a Bathurst Win, a Championship and multiple race wins and podiums during a period that was throughly dominated by Holden rivals Triple Eight Race Engineering.

The 2016 Supercars season was largely dominated by Holden who won 24 of the 29 races held across the year and Winterbottom was the lone Ford winning driver for the year winning at Perth and in New Zealand of which this model is set to replicate.

In fact such was Holden’s dominance for the year and in particular Triple Eight in the Red Bull Holden VF Commodore’s of Whincup and van Gisbergen that this Winterbottom win broke a 4 race win streak for the rival team, only for them to go on and win the next 3 races to finish the year as Champions, so it was a remarkable effort from Winterbottom and The Bottle-O Team to not only claim another win for the year but to continue to be one of the lone hands of resistance for the blue oval.

This model will be produced in a limited edition (402) with a numbered Certificate of Authenticity. 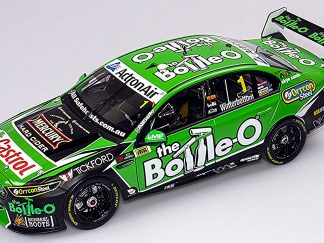