The 1971 Hardie-Ferodo 500 Race was one full of action between record breaking lap times and a crash that made Bill Brown almost as famous as winner Allan Moffat.

After the qualifying round the Ford XY Falcon Phase III GT-HO proved it was the race car to beat. Allan Moffat and his XY was in a class of his own when he secured pole position with a time of 2m 38.9s that was 3 seconds faster than John French who also raced in a factory XY GT-HO Phase III.

The weather for the Hardie-Ferodo 500 race had light wind and dust which proved great conditions for the XY. Once Moffat gained the lead he didn’t let it go, he held first place, not even a pesky cardboard box would make him give up his position for a pit stop to remove the box from his grille.

Moffat completed the Hardie-Ferodo 500 with 130 Laps, fastest lap of 2m 44s and was awarded first place finishing with a record time of 6h 09m 49.5s, beating the 1969 record by 22 minutes. Classic Carlectables are proud to present a special Gold Livery Edition of the Ford XY Falcon Phase III GT-HO to celebrate the 50th Anniversary of its 1971 Bathurst victory. 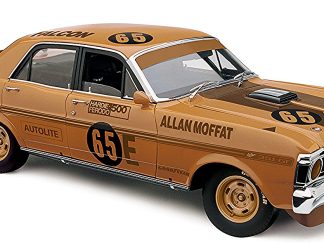