The Holden HR range was released in April 1966, replacing the Holden HD series which had been in production since 1965. In addition to a revised grille, the HR featured a reworked roofline and larger rear window (on the sedans), revised rear lights (on sedans and wagons) and changes to almost all exterior body panels. Other changes included revised ball joint front suspension, widened track, improved interior trim and woodgrain interior finish for the Premier models. Six months after the launch of the HR, all models were given a safety upgrade with the addition of front safety belts, windscreen washers, reversing lights, sunvisors and a shatterproof interior rearview mirror.

Colin
UK
I have received the products (Mad Max models) today. I liked the products very much. Thank you for the careful packing and quick transaction.
Yukiya
Japan
I just wanted to let you know that I received Order #1687 for my 3- 1:43 car order and couldn’t be more pleased with both the cars and their boxes. Thank you very much. Have a g’day down under. 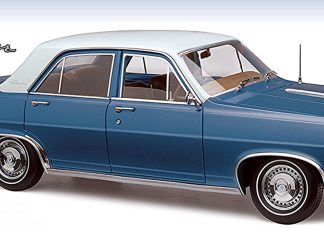