Thomas Randle enters the 2022 Repco Supercars Championship Season for the first time as a full time solo driver in the ‘main game’. Racing the Castrol backed #55 Ford Mustang GT in 2022 after a couple of years of Supercars wildcards and enduro co-driver duties, this popular young driver has also previously won championships in the Formula Ford Series, Toyota Racing Series and the Dunlop Super2 Series and is definitely one to watch in Supercars for the future.
It’s always nice to be producing any race car which features a Castrol livery and Randle’s Tickford Racing run 2022 Mustang is no exception. It will be a great model to add to collections for Castrol Racing fans and will display nicely next to his 2021 Castrol Wildcard model which we have previously announced.

This model will be produced in high quality sealed body die-cast with clear windows, detailed interior and will be presented in a clear display case in a limited edition with an individually numbered backing board which acts as the Certificate of Authenticity. 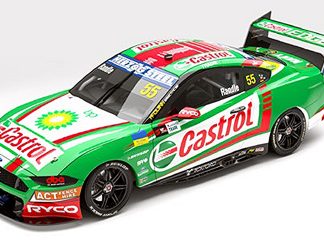