When you think of Australian motorsport icons, Dick Johnson is a name that instantly springs to mind. With 5 Australian Touring Car
Championships, 3 Bathurst 1000 victories and many other accolades against his name, the 2001 V8 Supercars Hall of Fame inductee is quite
simply, a legend.

After narrowly missing out on pole in qualifying, Dick Johnson and co-driver John Bowe beat a host of extremely capable challengers to win
the 1989 Tooheys 1000 in their Shell Ultra Hi Sierra. Those challengers included the Eggenberger built and engineered Allan Moffat Sierra’s
driven by European stars Klaus Niedzwiedz and Frank Biela, the Nissan Motorsport Australia Skyline HR31 GTS-R, driven by Jim Richards and Mark Skaife as well as pole sitter Peter Brock’s Andy Rouse built Sierra (with Rouse co-driving) who ultimately failed to finish the race.
The win was Johnson’s 2nd Bathurst 1000 victory and the win, along with the esteem in which the #17 DJR Sierra would ultimately be held in by the international motor racing community, instantly locked the car in as a fan favourite and 30 years on, still holds a special place in many peoples hearts.

Authentic Collectables are proud to be releasing this limited edition illustrated print by designer / illustrator Tristan Groves. Printed on
250gsm matte paper stock using offset print technology, it measures a large 594 X 841mm. Officially licensed by Dick Johnson Racing, each copy will be individually numbered and signed by Dick Johnson and the artist. 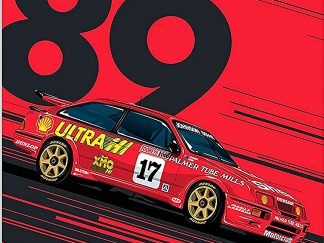